Eating disorder sufferers can find it to be very difficult to talk about or explain their depression, especially to someone who has never experienced such feelings themselves. When it comes to depression and eating disorders, things that used to give an individual self-esteem or a sense of value suddenly vanish. Things that were once important no longer seem to matter, feel genuine, or become overshadowed by negative thoughts and self-image. Depression, much like eating disorders, is incredibly isolating.

There are three main types of depression, and they are:

A mood disorder that is characterized by a combination of symptoms, such as loss of interest or pleasure in almost all activities, disturbance in appetite, changes in sleep patterns, feelings of guilt, loss of self-esteem, or suicidal thoughts or attempts.

A mild but long-term (chronic) form of depression with the same symptoms as major depression. Symptoms often last for two years, and often for much longer than that. People with dysthymia are often thought of as being overly critical, constantly complaining, or incapable of having fun.

Formerly called ‘manic depression’ is a mental illness that brings severe high and low moods and changes in sleep, energy, thinking, and behavior. These mood fluctuations do not follow a set pattern. A person may remain in the same mood state (depressed or manic) for several months before switching to the opposite mood. These episodes can happen over a period of weeks, months, and sometimes even years.

Not everyone who is depressed experiences all of the symptoms common with depression, yet some may suffer from many. The severity of depression symptoms may vary and can also vary over time as well.

Not everyone who is depressed experiences all of the symptoms common with depression, yet some may suffer from many.

Some of the symptoms are:

How Eating Disorders Play A Role

Individuals with eating disorders and depression may also show signs of other self-destructive behaviors. Eating disorders are a negative means of coping with life and stress, as well as a reaction to low self-esteem. 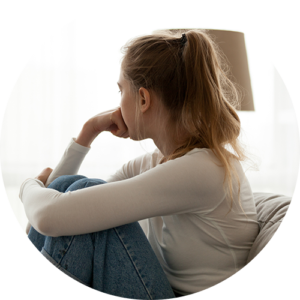 Research has also shown that being malnourished and severely underweight, common in anorexia, causes physiological changes that can negative affect your mood. Also, when a person becomes fixated and obsessed with body size and shape, this can fuel their depressive state. This is how anorexia and depression can fuel one another.

Additionally, it has been seen on a biological level that the brain’s ability to produce neurotransmitters that effect mood are also severely depleted by malnutrition. As an individual becomes more malnourished, serotonin production decreases, making traditional antidepressant medication for anorexia and depression less effective.

While treatment for depression and eating disorders can be challenging and complex, it can be done. At The Meadows Ranch, we know that eating disorder treatment is most effective when it is combined with psychological counseling to address the underlying issues of your particular disorder and symptoms.

This is why we incorporate a variety of therapies to not only help our patients regain a healthy weight, but these therapies also help tackle the patients’ co-occurring depression. For instance, Cognitive-Behavioral Therapy is considered especially effective for treating eating disorders such as bulimia nervosa and our Family Systems Theory is particularly successful helping patients recover from anorexia.

For additional information about the treatment of eating disorders and depression, please call to speak to a Counselor at 866-390-5100 and we will contact you with the information you need.