A wide range of other eating disorders, including pica, rumination disorder, ARFID, and OSFED, can also cause serious mental and physical health concerns.

A spectrum of other feeding and eating disorders exists outside of the most common specified conditions. Generally, the need for clinical intervention and treatment rests on four factors: the presence of any other medical or psychiatric conditions, the severity of the condition, the degree of disruption to daily life, and the acuity of the distress the individual is experiencing. In addition to anorexia nervosa, bulimia nervosa, and binge eating disorder, other eating disorders that an individual may suffer from include:

If you sense that a loved one is showing signs of a feeding or eating disorder, it is recommended that you consult a primary physician or treatment professional for advice on next steps.

Pica is a feeding disorder in which an individual persists in consuming nonnutritive, nonfood substances. The eating behavior lies outside any cultural norm or social compulsion, and it is classified as pica if it continues for more than a month. For example, this may include the inexplicable consumption of substances such as lotion, soap, or dirt. When pica occurs in tandem with a psychiatric condition or intellectual disability, it may require clinical intervention.

Avoidant/restrictive food intake disorder is a condition in which individuals resist food intake for reasons that do not pertain to food preferences or any medical condition. It stems from a fear of the adverse consequences of eating food or being repelled by the sensory characteristics of food, and it may present as a total lack of interest in eating. Severe ARFID can result in malnutrition, significant weight loss or inability to meet weight standards for one’s developmental age, dependence on tube feeding or supplements, and impaired psychosocial functioning. If ARFID cannot be explained by a medical or mental health condition, its consequences to an individual’s quality of life may mandate clinical intervention.

Several other specific feeding and eating disorders fall on the spectrum of disturbed or atypical eating patterns. This includes low frequency forms of anorexia and bulimia, in which an individual is exhibiting behaviors of these conditions but not as often as once a week for three months. Because the minimum criteria according the DSM-5 are not met, these would be considered OSFED. Other OSFED include the following:

The diagnosis of unspecified feeding or eating disorder is commonly used when there is not enough information to make any definitive diagnosis on a person’s disturbed eating practices. It may be used as a placeholder or to identify an eating disturbance that is either not fully developed or classified by the current DSM.

Treatment for Other Eating Disorders at The Meadows Ranch

At The Meadows Ranch, we have deep-seated experience and expertise in treating eating disorders and any co-occurring conditions an individual may be suffering from. Eating disorders may coincide with substance abuse or mental health conditions, such as anxiety and depression, as well as medical issues that can complicate the healing process. We work to help individuals correct unhealthy coping patterns, process trauma they’ve experienced, and rediscover the connection between the brain, emotions, and body through mindfulness practices.

Eating disorders can take a tremendous toll on individuals and their families, and our compassionate approach addresses the needs of each person and equips loved ones to support the recovery journey. Our research-backed program includes a mix of individual, group, and experiential therapies alongside intentional family involvement for the best chance at total, long-term recovery. If you or a loved one is dealing with an eating disorder, get in touch with our team today. Our caring staff are standing by to answer your questions and help you get started on the road to recovery. 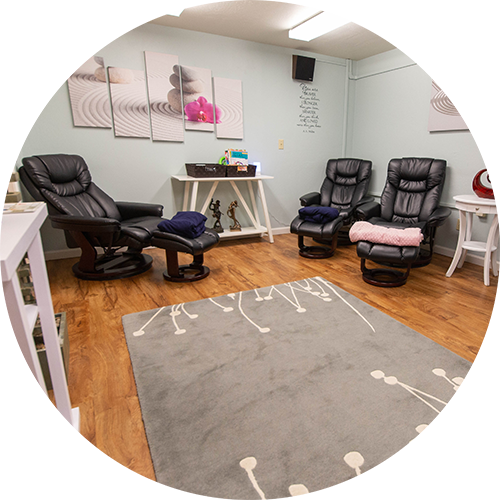 Get Answers to Your Questions

If you or a loved one would like to know more about eating disorder treatment at The Meadows Ranch, please give us a call to speak to one of our trained intake coordinators for assistance.