We’ve all done it before. After a stressful day at work or a fight with a loved one, you come home, open the pantry door, and grab a bag of chips. Before you know it, you’ve eaten the entire bag. Or you take the ice cream out of the freezer and polish off the whole carton.

Overeating has become a bit of an American pastime, with fast-food restaurants on every corner and holidays like Thanksgiving all but encouraging it. In our supersized culture, how can we tell whether our overeating is simply a bad habit or an actual eating disorder?

When Does Overeating Become a Problem?

In our supersized culture, how can we tell whether our overeating is simply a bad habit or an actual eating disorder?

Occasional overeating is not something to worry about. You may even overeat more often than you would like without it being a true disorder. But if you find yourself uncontrollably and compulsively overeating on a regular basis, you might struggle from something called binge eating disorder (BED).

Binge eating disorder may not be a condition you’ve heard of before. Oftentimes, when we think of eating disorders, we think of anorexia and bulimia and tend to visualize someone who is too thin. Because of this, it may be surprising to learn that BED is the most common eating disorder among adults, with 3% of all Americans experiencing it at some point in their lives, according to the National Center for Biotechnology Information. However, for years it went unacknowledged as a disorder, which is why many are not familiar with it.

Binge eating disorder is characterized by repeated consumption of large amounts of food due to compulsion, rather than hunger. The compulsive nature of the overeating often leads to feelings of being out of control, as well as eating very quickly and to a level of discomfort.

There are certain characteristics to look for if you think your overeating could be a problem. Start with these common symptoms of binge eating disorder (BED):

Binge eating disorder is often associated with other psychological symptoms, such as depression and anxiety, as well as substance abuse. In fact, according to Frontiers in Psychology, BED shares many characteristics with addiction, and people who struggle with addiction share certain personality traits — like impulsivity and sensation-seeking — with people who struggle with eating disorders like BED.

How to Cope with BED

If you are concerned about your overeating, notice any of the above symptoms, or believe you have BED, don’t try to deal with it on your own. Although BED has only recently been added to the Diagnostic & Statistical Manual of Mental Disorders (DSM), according to VerywellMind.com, it is a true disorder that needs medical treatment. Psychotherapy and Cognitive Behavioral Therapy (CBT) are among the treatments that have been shown to be highly effective in addressing and overcoming BED. 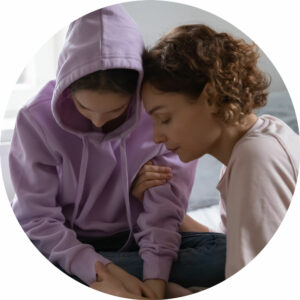 We know that seeking help for an eating disorder is easier said than done, however. If you struggle with binge eating, you’re probably familiar with the shame that comes with it. In fact, shame is not only a huge driver of eating disorders but often a barrier to getting help.

“The shame piece becomes a barrier coming into treatment,” says Erica Trocino, The Meadows Ranch’s Clinical Director, “because [people] want to believe that they’re not that sick … that’s essentially what shame is telling them, that you’re not sick enough, you’re not good enough to get that care. Just keep waiting, it’s not that bad.”

Whether you’re trying to convince your loved ones that you are fine, or you’re afraid to admit that you have a problem you can’t fix, it can be easy to believe you don’t need help.

Trocino encourages anyone who thinks they may have a problem to ask for help. Don’t wait until you hit rock bottom; in fact, the sooner you take action, the better. You don’t have to be at your worst to get treatment.

How to Get Help

At The Meadows Ranch, we offer holistic, individualized treatment for eating disorders, including BED, as well as a range of co-occurring disorders. We address not just the symptoms of your eating disorder, but the trauma and emotional issues underneath those symptoms as well. You’ll also be armed with healthy coping mechanisms to maintain long-term health as you continue your journey. If you’re struggling, the time to reach out is now. We’re ready to help you onto the road to recovery.