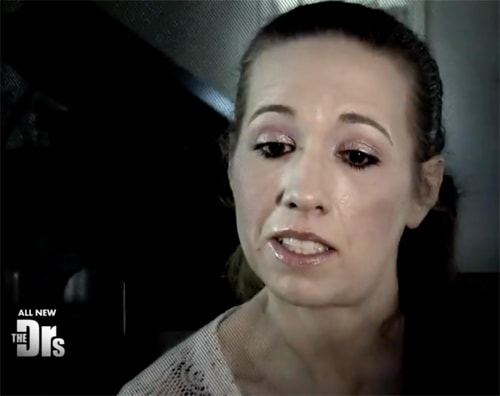 Like so many women who struggle with eating disorders, Michelle hid her extreme weight loss from her loved ones with her clothing. Her mother didn’t realize that there was a problem until she began to look extremely thin. Even her nine- year-old son, who lives with her every day, did not know. She also was not satisfied with her weight loss. When she looked in the mirror, still saw the 315 woman she had been before.

She eventually realized that her binging and purging were likely to kill her, but she could not stop.

After Dr. Mike Dow and Dr. Jorge Rodriguez talked to Michelle about the emotional and physical consequences of her disorder, it became clear that she would need an inpatient treatment program to reverse the damage and build a new life.

On The Doctors, she revealed her secret to her mother, and to the world.

She had succumbed to depression, hopelessness, and a low sense of self-worth. She also had done some damage to her teeth and esophagus, and had a dangerously low level of potassium, which can lead to an instant heart attack. Dr. Rodriguez feared that she could go into cardiac arrest at any moment.

The good news is that the damage to her body was not irreversible, and that with the right, comprehensive treatment program, she could make a full recovery.

Those of us at The Meadows Ranch were so honored to be asked by the show’s producers to be a part of Michelle’s recovery journey.

The Meadows Ranch Senior Vice President Patty Evans was in audience, waiting to offer her 90 days of treatment at our world-class, women-only facility in Wickenburg, Arizona. Though she admitted that she was a little scared, she agreed to take the next step, and get her life back. We could not be happier for her.

We feel inspired by Michelle’s bravery and her willingness to take on this very difficult challenge. We hope you do too. If you are hiding your eating disorder from your loved ones, now is the time to take those crucial first steps of your own. Reach out. Ask for help. It could save your life.

For more information on The Meadows Ranch acute and residential eating disorder treatment programs for women and female adolescents, call 800-445-1900, or visit www.remudaranch.com.