As it turns out, the Latino community had the highest rates of binge eating disorder, followed by the Black community.

In any number of movies, television shows, or after-school specials that have aired over the years, there’s often a strikingly similar depiction of what someone who struggles with an eating disorder looks like. And that familiar image — a white, very thin, generally young and affluent woman— has frequently led to a perception that eating disorders aren’t affecting people of color. But as research continues to emerge on the regularity of disordered eating in these communities, the data is clear: Eating disorders don’t discriminate.

According to findings from The National Eating Disorder Association (NEDA), 30 million Americans — 20 million women and 10 million men — have struggled with an eating disorder at some point in their lives. Experts believe the numbers actually skew higher based on who seeks treatment, who actually receives these services, and what that process entails. (In other words, it’s not necessarily equal for everyone.)

Kicking Myths to the Curb

In an effort to educate the public and break down stereotypes about eating disorders, the founder of Binge Eating Disorder Association (BEDA), Chevese Turner, explains that eating disorders don’t only affect thin men and women. She knows because she struggled with binge eating disorder and atypical anorexia herself — and didn’t fit the standard “profile.”

Atypical anorexia may involve calorie counting and restricting food intake, but the end result wasn’t a body that would raise eyebrows for its extreme thinness. After discovering that people with eating disorders who weigh more weren’t being represented statistically, and that binge eating disorder wasn’t even recognized in the American Psychiatric Association’s Diagnostic and Statistical Manual of Mental Disorders (DSM-V) until 2013, Turner helped champion that change in 2013 so that more data about binge eating and who it affects most could emerge.

30 million Americans — 20 million women and 10 million men — have struggled with an eating disorder at some point in their lives. 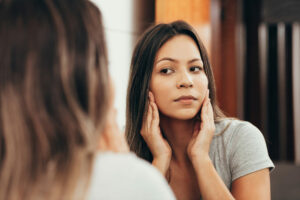 As it turns out, the Latino community had the highest rates of binge eating disorder, followed by the Black community. And research found the underlying reasons weren’t commonly related to self-esteem or poor body image. Instead, food insecurity was at the root for some, stemming from poverty or going without much in the way of food in the journey from Central America or Mexico to the United States.

In addition to food insecurity, trauma, anxiety, and depression were also considered triggers. Along with the attempt to fit in a country where thinness is revered, and their bodies naturally don’t cooperate.

Fighting the Stigma Across Race Lines

It’s been said that eating disorders thrive in isolation, and for Black women who struggle, reaching out for help isn’t easy for a number of reasons.

One of the primary issues is being overlooked and underserved with treatment options for eating disorders. A basic misunderstanding of the community and its specific needs has led to greater efforts to educate the public and medical professionals through various initiatives. But for many women struggling who have a larger body type, it’s still frustrating because they are told to lose weight, exercise more, have more self-control, even when those recommendations don’t address the actual issue.

A preoccupation with thin bodies equaling good health, a lack of Black providers related to eating disorders, and a dearth of data representing people of color all contribute to why many Black and brown individuals don’t seek treatment.

The COVID pandemic and recent social unrest, which included a plethora of racist messages posted on social media during the protests over police brutality, have also contributed to an uptick of eating disorders in the Black community. For many, food was a source of comfort during an uncertain time, and the potential for being shamed while seeking help prevented many from reaching out for it.

Another barrier for people of color in not choosing to seek help for eating disorders is that treatment may feel a little too one-size-fits-all and not be sensitive to cultural differences.

Thankfully, that’s not the case at The Meadows Ranch. With a proven track record of helping women and girls recover from eating disorders, our program meets every person where they’re at. Our therapies and services focus on uncovering the complex psychological factors that contribute to an unhealthy relationship with food so patients can find lasting healing.