An eating disorder is a quest for a sense of control when the rest of your life feels out of control. For me, it became a safety net, a comfort zone, and an escape from the stress and anxiety that school brought on. I operated under the delusion that if I shifted all my energy and focus to trying to control something tangible—pounds lost, miles run, calories consumed—then, that sense of control would somehow translate into other areas of my life as well.

I’m now able to recognize just how illogical that sounds, but for someone in the trenches of an eating disorder, it feels very real. The reality, though, is that no amount of weight loss was ever going to be enough, because the key to my problems couldn’t be found through self-deprivation or the pursuit of a different body.

Up until about eight months ago, I spent the past couple of years cycling through this series of various mindsets, sometimes all in the same day:

Looking back at photos makes me sad. When I was in my eating disorder, I was constantly cold, tired, insecure, and generally apathetic. I was unable to think clearly or rationally. I was frustrated and ashamed that I couldn’t just get myself to eat; just gain the weight; just get over it. At my worst, I was reduced to a shell of my former self, both physically and mentally.

Eating disorders, like all mental illnesses, seep into all aspects of life. It distanced me from myself and others, preoccupied my every thought, jeopardized my health, and diminished the quality and meaning of almost everything I did. What I thought I was controlling was really controlling me. I truly felt powerless to stop, yet I would push away anything and anyone that threatened to break my rigid routine.

Now, after many difficult months, most days are good. Most days, I don’t feel the need to numb myself from whatever emotion I’m feeling, good or bad. (Contrary to my former belief, my anxiety won’t actually kill me and it WILL eventually pass!) Most days, I can eat without being consumed by regret and guilt. Most days, I am able to appreciate everything recovery has given me. I have energy, my *purrrsonality*, and my happiness back. I am able to be fully present and engaged in my own life instead of operating on autopilot, and the things that are truly important to me no longer have to take a backseat to my eating disorder.

But some days, like today, I have to take a step back and remind myself of how far I’ve come and how much I’ve learned about myself in the process. While the distance between these days on the struggle bus is becoming increasingly longer, sometimes the temptation to revert back to my old habits is as strong as ever.

I think this kind of ambivalence is, to some extent, natural. I don’t think it’ll ever feel unequivocally awesome to regain weight, but as long as I keep my why at the forefront of my mind, it is bearable. At some point, I hope it’s no longer about just being bearable, but that it stops mattering altogether.

The biggest difference is that now, even on the difficult days, I can say with confidence that I will continue to choose recovery over and over again until it’s no longer something that requires my conscious effort. Rather than judging myself for still struggling after this long, I’m practicing a little self-compassion and accepting where I am at present. I’m not yet where I hope to be, but for once I’m able to say, and genuinely believe, that IT. IS. OKAY.

Recovery is a journey, not a destination. For now, I will relish the good moments that are filled with peace, growth, self-acceptance, and gratitude for another day of health and happiness. (‘Cuz let’s be honest, eating real donuts is a lot more enjoyable than holding a donut float while dreaming about the donut I’d never let myself eat!)

Mental health is equally as important as physical health. One in five U.S. adults suffers from a diagnosable mental disorder. So, let’s start talking about it and help #endthestigma. No matter what you’re going through, you are not alone and you don’t have to suffer in silence. It is okay to not be okay, and asking for help is not a sign of weakness!

I’m not gonna lie, it has taken me a long time to gain (and maintain) the weight and it certainly hasn’t been easy, but with the support of some pretty great (and incredibly patient) peeps, an awesome treatment team, and a whole lotta yoga, I did it. I am happier and healthier than I’ve been in such a long time, and I’m finally at a point where I’m no longer ashamed of my struggle or to admit that I couldn’t have gotten here on my own. 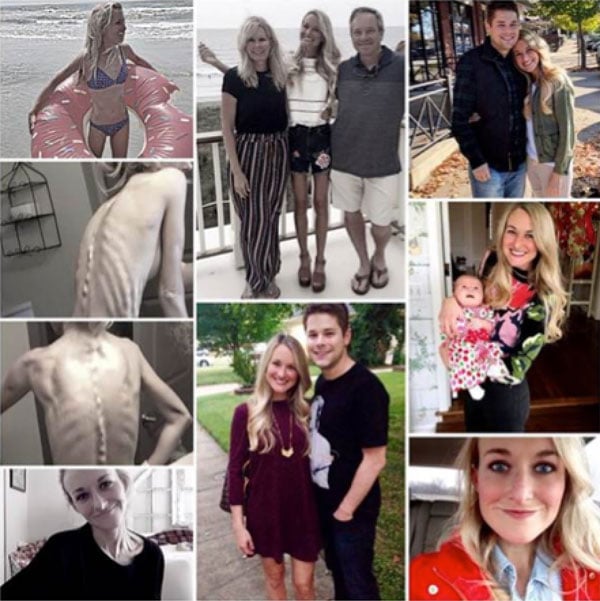