Currently, 30 million Americans struggle with eating disorders, which have the highest mortality rate of all mental illnesses. Roughly 20 percent of those diagnosed with an eating disorder will eventually die as a result of the condition.

Sadly, only 1 in 10 people who have an eating disorder will receive treatment. All too often, their inability to receive treatment is the result of a health insurance company denying coverage for the often-misunderstood disorder. 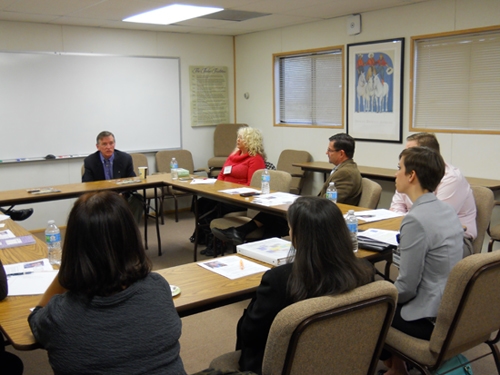 In May of last year, the Anna Westin Act of 2015 (H.R. 2515) was introduced to a congressional committee. The proposed bill would improve training for health professionals in identifying and treating eating disorders early, and ensure that the quality of treatment and insurance coverage available for people with eating disorders is equal to that of other illnesses.

During his visit at The Meadows Ranch, Representative Gosar learned more about the eating disorders and treatment options from some of the nation’s leading experts. He also heard firsthand about the positive impact the Anna Westin legislation would have on eating disorder patients from doctors, therapists, and nurses who work with patients struggling with these conditions every day.

“We were so pleased to welcome Congressman Gosar to The Meadows Ranch” says CEO Christopher Diamond. “As a healthcare provider himself, he understands the important role that early detection and intervention plays in helping people lead healthier lives and in keeping overall healthcare costs down. We look forward to more conversations and to his continued support.”

You can help spread the word about the Anna Westin Act by participating in the Eating Disorders Coalition’s Virtual Action Day on Thursday , January 28. Call or write to your representative, tag them on Facebook, or tweet at them and ask to sign on to support this important legislation.